The children of Hanover Street School, who were aged 6-11 when they did their project, learned about a wide range of environmental issues including single use plastics and the problems posed by discarded chewing gum on the streets of Aberdeen.  They thought that if they could make their Eco Pigs (very cute papier mache pigs with eco messages on their wings) fly, then perhaps they could change the world.

Inspired by the environmental damage they had seen in Blue Planet 2, they approached local shopkeepers, cafe and bar owners to ask them to stop providing single use items like drinking straws made from plastic in their restaurants.  They even got the school caterers to end the use of single use plastic for school lunches! Businesses that agreed with the children’s requests to make changes received an Eco Pig to display on their premises. The Eco Pigs went far and wide, with one going to the office of local MP Kirsty Blackman, who mentioned the children’s work in the House of Commons.   Another now resides in the home of Sir David Attenborough, who sent them a personal letter of thanks for the work they were doing to protect the environment for the future.

YPTE Director, Peter Littlewood, said: “The children of Hanover Street school have done it again!  They have shown real leadership in their community, acting as ambassadors for the environment and achieving real change.  They are so passionate about caring for our world, which is fantastic to see and they offer proof that young people’s opinions are not only being listened to, but acted upon by adults too.  In a busy world of work, it’s often easier to ignore changes that make sense for the planet, but Hanover Street’s children continue to show the grown-ups the best ways to be.” 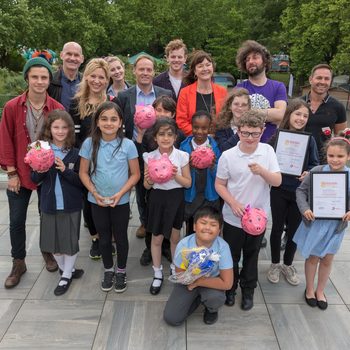